How a New Product Was Born: The BlumSafe Screen 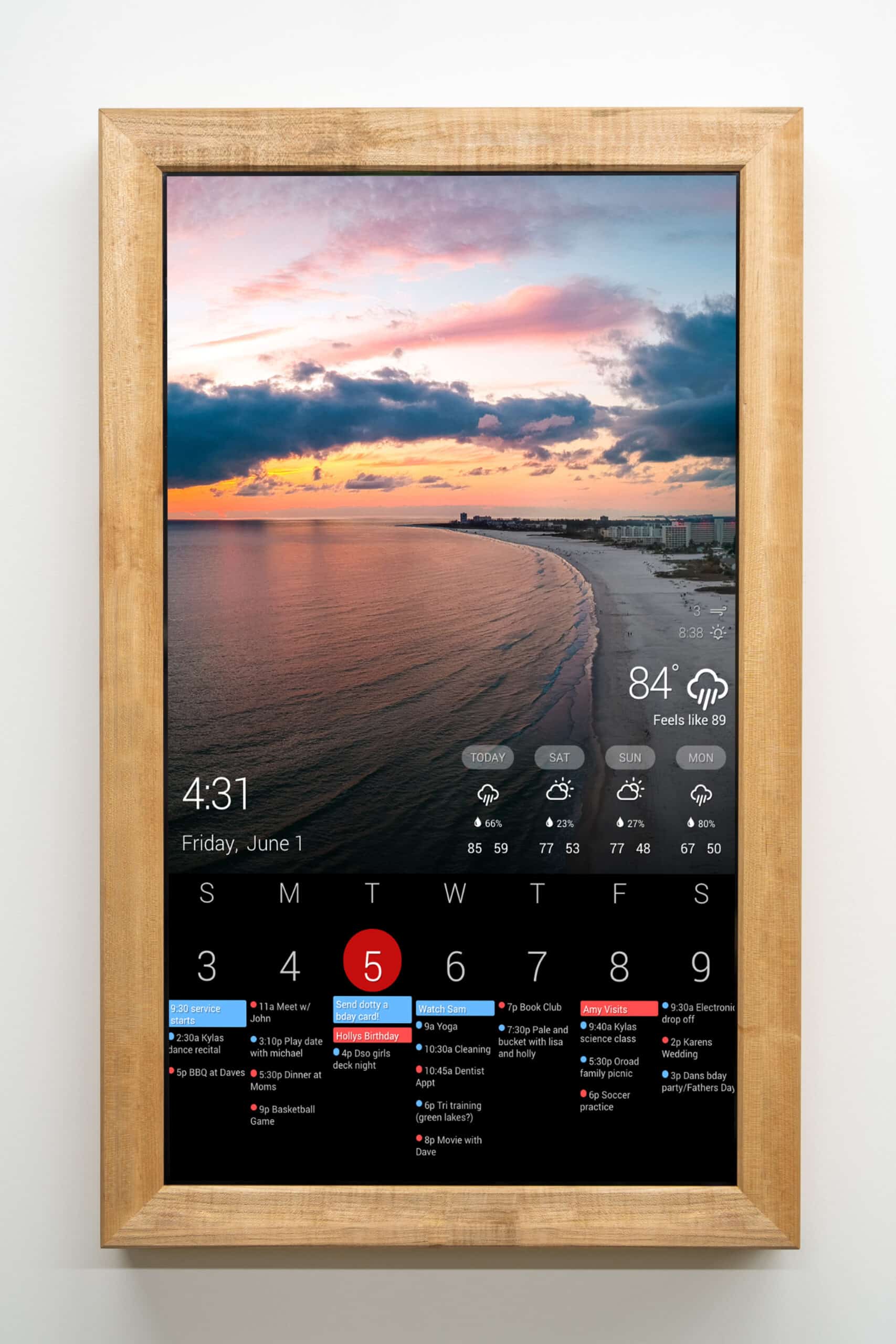 Recently, we introduced a unique, new product, the Screen. The Screen is a secretly-hinged, 32” (diagonal) electronic photo album and information board that cleverly conceals your BlumSafe, or ANY wall safe or wall nook. The Screen, proudly manufactured in Ohio, represents a marriage of two product concepts – easily customizable home electronic display boards, on one hand, and concealment furniture on the other hand. I have become friendly with many of our customers over the years, and many of you have asked me “How did this come about and why is this special?” This post gives the answer, and also explains why I have so much fun with BlumSafe — creating tangible products after spending a career in law and finance “creating” and selling intangible ones.

The main security idea behind any wall safe, like the BlumSafe, is that it is easily concealable. Particularly if you are trying to defeat the fast, in and out burglar or the “dishonest invitee” (cleaning person, plumber, etc.), concealment of your valuables can provide another layer of protection to the layer of steel. We have always focused our customers on this, suggesting they consider concealing their BlumSafe behind a canvas, in a closet behind clothes, etc. But I am a gadget freak, and have always been thinking about something more interesting for this role. Several ideas came together about four months ago that resulted in the birth of the Screen.

For some time I was looking for a LARGE digital picture frame product that could share our lives and those of our children with my aging mother in-law, and which was editable on the fly. Other than a Samsung TV solution, I really didn’t find anything I liked in the space – most of it was over-priced and of limited capabilities. I had been monkeying around with a Raspberry Pi hobbyist “computer” roughly the size of a deck of cards, re-teaching myself some basic programming skills (my last experience “programming” was in the early 80’s in the Wharton mainframe timesharing lab at Penn, playing with a language called APL). I came across a Raspberry project called MagicMirror, which originated as a cool way to see your calendar, stock prices, weather and traffic. It allows one to project this information on an LCD monitor through a two-way mirror while shaving in the morning. Someone had the bright idea that you could also use this environment to show photos and a myriad of other information on a monitor or TV, NOT through a mirror. I made one for my mother in-law, primarily as a photo display with weather and a world clock, after my wife populated a Google album with over five hundred photos spanning generations (and countries). My mother in-law absolutely loved it. Mission accomplished.

Separately, an early BlumSafe customer with whom I regularly speak hit me with the idea for a wall safe concealment mechanism using pneumatic lifters on a photo frame containing a hidden nook in the frame. Sol had seen it on a concealment furniture site. What is concealment furniture, you may ask? I looked it up and I learned about the sizable genre of concealment furniture, which involves ingeniously carpentered invisible draws, nooks furniture bases and wall display frames marketed to those seeking to primarily hide guns and money (but no lawyers, Warren Zevon).

I already had the interest in concealment alternatives for my BlumSafe, was familiar with electronic display boards, and now was presented with this concealment furniture idea that went beyond a simple canvas on the wall. Why not marry that idea somehow with the MagicMirror electronic display board concept that so enchanted my mother in-law? Couple that with a family calendar, To-Do list etc, and it would be the perfect product for the “busy home” demographic that provides the most of BlumSafe’s customers these days.

After some initial testing, I didn’t feel comfortable with a big computer monitor lifting upwards on pneumatic tubes, but learned about the world of invisible hinges (Soss makes the “gold standard” hinge you will see in safe rooms littering Greenwich, Connecticut). I soon settled on a hinged solution opening sideways away from the safe that gave the appearance that the Screen was permanently attached to the wall.

There was one problem, MagicMirror technology is still very much a hobbyist project that required some programming skills and was finicky. Thanks to the mighty search engine, I found an upstate New York company called DAK. DAK has separately built similar-to-Magic Mirror functionality on a cloud based service, where DAK maintains and improves the software and feature set, and provides a sleek, object-oriented front end to allow relative novices to configure their displays over the internet. When I reached out, founder of DAK, Dan, who has built a really cool business from scratch, suggested I contact one of his customers, Dave, who makes stationary (non-hinged) horizontal wall displays based on the DAK ecosystem.

Dave is a great guy, with exceptional finish carpentry skills, and I worked with him iteratively over a number of months to get the Screen to exactly where we wanted it. We made a couple of mistakes, but ultimately came up with a great product that could not only be used to conceal a BlumSafe, but any wall safe – or even a wall nook that we now sell on our website which fits into a wall of 2” X 4” construction (and greatly enlarges our audience). The optional RFID lock that secures the Screen to the wall took us some time to get right, but it is a nice piece, of higher quality than typically found in some other concealment furniture.  The beauty of the Screen as a concealment device is that you wouldn’t expect anything to be hidden behind it, because it is such a functional fixture of some value in and of itself. And as a wall mounted electronic monitor, a bad guy would think nothing of it being secured to the wall, like any other television, and thus would not expect anything to be hidden behind it.

All in all, we are proud of this unique addition to the BlumSafe family, and hope you can find a way to enjoy it.